RECAP:  The present author has been using Hotmovies to maintain a list of my favorite (classic) adult film stars.  This is not intended as a comprehensive list of the best or most legendary stars; these are just my personal favorites, and this list is purely for fun.  I have included links to each performer's Hotmovies profile, their Internet Movie Database (IMDb) profile, their Internet Adult Film Database (IAFD) profile, and (where applicable) their dedicated thread at the Vintage Erotica Forum (VEF).  The present author cannot guarantee that there are no errors at these links.  Just something to keep in mind as you explore.

This list is in no particular order, except for the first two entries.  In cases where a performer is known by multiple names, I've gone with my personal preference.  Not all the profiles use the same names for the same person.

This is the twelfth installment of an ongoing series.

If you're wondering why a song from someone named "Rhonda Vanderbildt" is being featured here, a quick examination will reveal the answer.  Yes, "Rhonda" is adult film star Rachel Ashley.  And you know what?  This song "Racing Heart" is actually really good!

If you're curious about Rachel Ashley's music career as Rhonda, here is a link to her Discogs profile.  It's pretty light, so there doesn't appear to be much out there.  I know I'm going to be on the lookout for more songs!
Posted By Your Online Secret at 8:00:00 PM 1 comment:

Email ThisBlogThis!Share to TwitterShare to FacebookShare to Pinterest
Labels: feature

Your Online Secret, Now On Letterboxd

Hey, did you see the news about Letterboxd and adult films?  Guess what?  Your Online Secret is now on Letterboxd!

This is not intended as a replacement for the blog (which is back if you hadn't noticed), but a way to track the films covered here.  Hopefully, it will eventually serve as a way to get eyeballs for this place.  We'll see.

The Letterboxd Your Online Secret list can be found here.  You will need to register an account and enable adult titles in the settings to see most of the entries.  This is still very much a work in progress, but it's already come together pretty well in my opinion.

There's still a lot more to say on Your Online Secret, but I realized recently that I am seriously burned out on doing this blog.  I'm going on what is intended to be a hiatus, but you and I both know these sort of "hiatuses" can turn out to be permanent.  Therefore, here is a notice if that happens to be the case here.

It's been fun, even if no one is reading most of the time.  Hopefully, I can get back to the right frame of mind for blogging.  Stay tuned!

Take Her To Your Leader 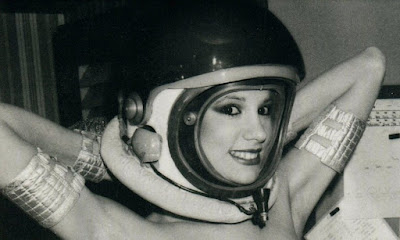 Your guess is as good as ours on this one.  I'll speculate that she was a burlesque dancer and the space helmet was part of her act.  But I don't really know, nor do I know the origin of this photo.  It was found on the Astromonster blog and has somehow slipped past the odious Tumblr filters.

Full image behind the cut!

Email ThisBlogThis!Share to TwitterShare to FacebookShare to Pinterest
Labels: pix 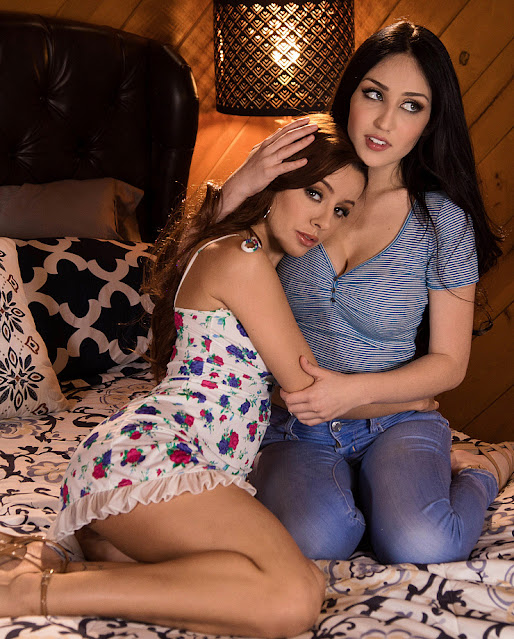 * The linked IMDb entry is for the scene compilation TEEN LESBIANS 2 which is available both via streaming platforms and DVD.  "BEST FRIENDS TO LOVERS" is the third scene included in TEEN LESBIANS 2.  As of this writing, there is no entry for TEEN LESBIANS 2 on IAFD.

I'm just going to come right out and say that I am pretty sure Alan X (aka Stills by Alan) is my favorite currently active adult director.  I sort of stumbled into this realization gradually, but I always find myself entertained by his work even if it isn't necessarily my cup of tea in certain instances.  Though I've actually already reviewed his work at Your Online Secret (FLASHBACK), I wanted to highlight one of his more recent scenes to discuss his current activities.

I decided to check out BEST FRIENDS TO LOVERS (via the TEEN LESBIANS 2 DVD mentioned above) after watching this video on the Holly Randall Unfiltered Youtube channel.  In the video, Vanna Bardot mentions that her favorite girl/girl scene partner is Jade Baker because they have known each other since high school and have chemistry together due to their friendship.  This really piqued my curiosity, and it just so happens this is the only studio scene featuring these two ladies.  So it was a real no-brainer to look into BEST FRIENDS TO LOVERS.

No synopsis this time, since it's kind of self-explanatory.  If you need one, check out the IAFD profile or the scene's page on the GirlGirl.com site.  It's actually a fairly long piece of text, but there is plenty of free content for you at the link, too.

I'm very impressed by BEST FRIENDS TO LOVERS.  I obviously know Alan X can deliver based on my experiences with his other productions.  These two women are also obviously professionals who are very good at what they do and give credible performances in addition to having hot sex.  But you can't fake the kind of chemistry these two do indeed have together.  Their roles as best friends has an extra layer because it's rooted in truth.  Vanna Bardot and Jade Baker are into one another and care about one another and it shines on the screen for all to see.

I highly recommend BEST FRIENDS TO LOVERS for anyone who enjoys characterization-driven lesbian sex scenes.  There's not a ton of detail, but what is there is golden. I think GirlGirl.com has basically become inactive due everything that happened in the world during 2020-2021, but it appears to still be operational at this writing.  Meanwhile, you can keep track of the current activities of Alan X, Vanna Bardot, and Jade Baker at their respective Twitter accounts! 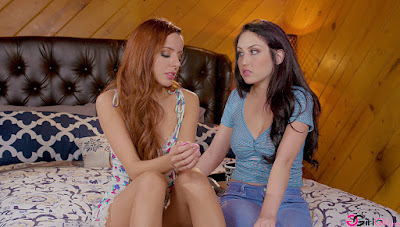 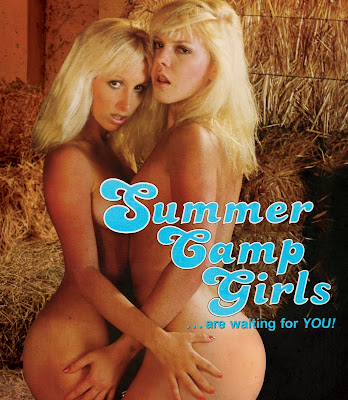 I never set out to review so many Robert McCallum (Gary Graver) movies in the first 12 months of Your Online Secret, but well, here we are.  The SUMMER CAMP GIRLS Blu-Ray was probably originally slated for June or July, but it got pushed up to April due to other circumstances.  That's even before summer!  However, I'm only just getting around to posting a review during the summer, so I guess we'll call it even.

SUMMER CAMP GIRLS tells of the campers and counselors at the amusingly-named Camp Quim.  None of the girls actually want to be there, but they make the best of it - especially when they go off on their own adventures after pulling some shenanigans while out on a bike ride.  However, a new girl (Shauna Grant) inadvertently causes all sorts of problems just by showing up, and it's her presence which pushes forward our nominal plot.

For the most part, SUMMER CAMP GIRLS is exactly what it says on the tin.  There are cute girls and they get up to sexy hijinks for our entertainment.  However, there is a dark undercurrent running thru some of the fun and games.  By the end, this movie ultimately turns into an unexpected story of redemption.  At least, I wasn't expecting it!

One of the highlights of SUMMER CAMP GIRLS for the present author was when Shauna Grant and Kimberly Carson showed up at the Bent Oak Bar.  This location piqued my interest since it appeared that filming took place both for exteriors and interiors there.  Some research led me to the address of 1704 N. Topanga Canyon Blvd., Topanga, CA 90290 for the Bent Oak Bar in this timeframe.  As it turns out, this exact address is the location of a business called the Topanga Living Cafe.  Our pal Spicy Goldman did a comparison (see below) and it appears to still be the same building after all these years!  You can check out the Topanga Living Cafe at their website. 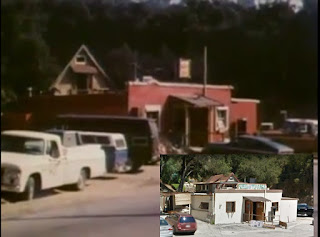 SUMMER CAMP GIRLS is an enjoyable film with a little more depth than expected from its promise.  I had a good time with it and would recommend it to those looking for productions from this era which might not be absolute classics, but are still worthwhile in their own right.  You can buy SUMMER CAMP GIRLS directly from Vinegar Syndrome or at other fine retailers!