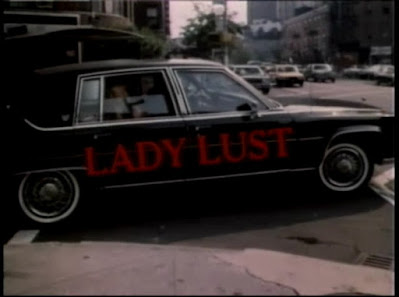 (Word of caution: It took me two tries to get thru this movie.  The sound on the Caballero DVD has an unnatural, echoey quality which I found so distracting that I gave up after a half hour the first time.  It took me awhile to return to the film, but I am glad I did.  I am told this sound problem is not present in the original release of the film, so I'm not sure what's going on with the most common version of LADY LUST now in circulation.) 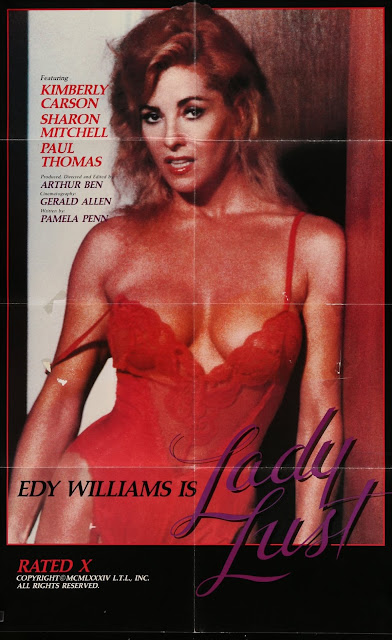 LADY LUST is known if it is known at all as a vehicle for erstwhile Russ Meyer starlet Edy Williams.  That's right, it's Edy in a HARDCORE movie!  Except, er, don't get your hopes up.  She doesn't even disrobe entirely, though that one pair of pantyhose leaves little to the imagination.  All her scenes are strictly softcore, and all you have to do is pay attention to know.  She's not exactly in top form ether, and most of the time looks like she doesn't really want to be there.  Since Annette Heinz shared an early scene with Edy that goes nowhere in the final cut of the film, I wondered if she had some insight, and Annette spoke very highly of her co-star.  So if Edy Williams was unhappy, it doesn't appear she was a diva.  So that's nice to hear.

Edy is still Edy though, and there is even a reference to Cannes in case you forgot.  There are moments where Her Edyness shines and they are great.  The chief issues with the movie as a piece of cinema are that Edy doesn't do enough and there is no real sibling chemistry between her and her on-screen baby sister Kimberly Carson. 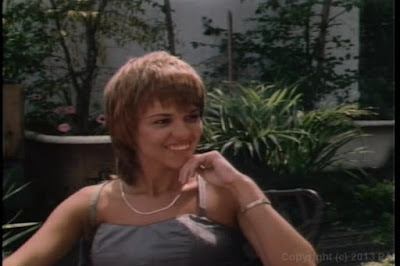 Edy plays Suzanne, a character of nebulous motives who runs a San Francisco art gallery and briefly flits back into the New York City (well, Queens) life of her sister Irene (Kimberly Carson).  You'd think it might be because Irene and her husband Max (Paul Thomas) just hit the lottery, but in fact, this doesn't seem to be the case.  The lottery subplot plays into the story a little (the kids are away at camp, for example), but Max is still working his job as a mailman for pity's sake.  Max and Irene are basically happy, but are in a bit of a rut.  Suzanne's chief role in the movie is changing the pace of Max and Irene's lives while she is around and allowing them to get in touch with their own fantasies and sexual desires.  Then she's gone again, but maybe her visit will resonate for the couple.

The funny thing about Edy and Kimberly having no discernible sisterly bond is there are attempts to establish it, but the two women just don't jell as relatives.  It could be Edy's possible antipathy or it could be Kimberly's alleged moodiness.  I dunno.  What makes it weird is that Kimberly and PT absolutely work as husband and wife.  Kimberly is adorable and naive; PT is kinda dry and down-to-Earth.  All of their scenes together are a joy and you understand why these characters gravitate back to one another even through challenges.

There's an intriguing supporting cast for this movie, but only Paula Meadows, Michael Gaunt, and Sharon Mitchell are given much in the way of actual roles (and Mitch just barely).  It seems like a waste to have someone like Jerry Butler on hand and then not even give him dialogue.  Just the consequence of dealing with these kind of movies sometimes.

LADY LUST might conjure some interest as a latter-day re-release due to the presence of Edy Williams alone.  It's not a Russ Meyer movie, but she made those and she's in this.  Good enough, eh?  Sadly, the rights seem to be owned by Caballero itself according to my sources, so a remastered reissue looks unlikely at this point.  Hopefully it can be salvaged someday, as it deserves a wider audience.